The Butterfly Effect: one butterfly flaps their wings and so begins a trickle of events.

This week I am overwhelmed. It is not as simple as school or infoglut or uncertainty. It is not doubt or love or lack of sleep. It is the realization that no matter how developed society thinks it becomes, society is still built as a protectionist state - aware of its immediate surroundings and needs and fearful / unwilling to recognize that what once was viable is no longer such.

A child afraid of change, yet one willing to dive into dirt because someone else will always clean up the mess.

Wikileaks Debacle: Wikileaks scares governments. Even with all the ‘initiatives’ towards making Freedom of Information and transparency universal governments place Wikileaks as an enemy, an entity that cannot be regulated and should therefore be suffocated - Julian Assange as the leader, is the one to take down.

I give credit to Iceland for taking an ‘initiative’ and actually following through (until now at least). The Icelandic Modern Media Initiative is to gain full effect in April 2011. The IMMI is an initiative to which Wikileaks was an advisor. An initiative Julian Assange and Daniel Domscheit-Berg proposed, most directly, to the Icelandic government and peoples (based on my search queries) during an interview with Silfur Egils:

The interview discusses a massive leak of Iceland’s corrupt banking system, a leak for which an injunction was sought and Assange and Domscheit-Berg “should have been” jailed for a year. Assange describes, during the interview, the media as an ‘injuncted media’ and mentions how particularly bad the situation is in the U.K. Yet, the U.K states its initiative towards transparency and freedom of information is important to the develop of the state which is why it established the Freedom of Information Act 2000 (in effect since 2005), except the Act consists of 25/26 clauses that validate exemption and clause 54 which establishes a veto power (already used twice) - so much for full discloser.

Silfur Egils questions Assange on his proposal that Iceland become ‘a vanguard of publishing freedom’. Iceland took his suggestions and moved forward towards implementation. Iceland is now rumored to become a media haven - place where Freedom of Information is a truth and not a right obtained only if you are clever enough to manipulate the law to give you what it is ‘envisioned’ to provide for you but so desperately tries to evade.

Middle East Reform: “Gadhafi called on Libyans who ‘love and support’ him to go out on the streets and demonstrate for him. “‘Do you want to be slaves of the Americans?’ he said” (CNN Blog: N. Africa, Mideast protests: Arab League suspends Libya).

Moammar Gadhafi’s words to the Libyan peoples I interpret as manipulation and fear-inducing. In the words of an American teenage girl (really this has been said many times before, to me personally and on TV shows like Boy Meets World): ‘Pick, you’re either my friend or theirs’. Another version would be ‘you’re either with me or against me’. Neither of the two are sayings a true leader would utter to people he cares for or to people he respects.

Omar al Dabashi, the Libyan U.N official, told the BBC, “The information that we are getting is that the regime is killing whomever goes out on the streets…has clearly declared a genocide against his own people” (WSJ: Gadhafi Defies Opponents).

Gadhafi has been in power since 1969: at age 27, the army captain took power from King Idris, rose from the coup and has maintained his status for 42 years. At some point, enough is enough. At some point, change is the only option.

U.S contradictions and its demise: From the view of Johan Galtung i. Economy : Nature / Environment ii. Finance Economy : Real Economy 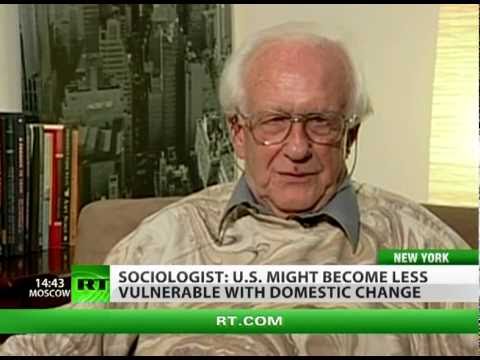 Hi. I am American. I was born in a democratic state. I was taught that freedom was my right, my voice my strongest asset and the World mine for the taking. If that is true: why am I so powerless? why do I feel like my voice is never heard. Why - when I hear news about others demonstrating for their rights to freedom and their rights to be heard - do I feel like my throat closes and I lose my ability to speak and to be heard. It is probably because the power to do something is in the hands of people I have no access to and the people who want the assistance I cannot reach.

“There’s a lot of potential for change, for positive change, that is what a crisis always triggers. And information is a critical part of this change because you need access to the real information to be able to meaningfully develop for the future.” - Daniel Domscheit-Berg

“Crisis is a terrible thing to waste”. - Julian Assange

As ‘free’ societies that shame those who lie, cheat, and make mistakes without asking why or even caring about their reasons; prosecutes those who learned a cheat code and used it to their advantage, when the means by which you gained the information involved cheat codes of your own design; societies that, generally, strive towards building a better future for the “future”; societies that believe in progress and learning from the past: you fall short from the ideal you so virtuously advocate.

Dear Society, (perhaps most of all, the advocates and the ones who “stand for what they preach”)

You lie, cheat, manipulate, destroy, corrupt, progress at a comfortable pace - if at all, and repeat history on a daily basis. Why are you such a hypocrite? And why are you so afraid of transparency? Is it really a matter of national security and the protection of the parties involved or is it embarrassment? In a society where transparency stands for what it is, you wouldn’t have to hope someone else didn’t uncover your mistakes or rely on someone else cleaning up after you. You might just be a better version of yourself and you might actually be what you preach.

My #011 ‘new’: In a world where the Internet makes it possible for the divide created by nature and man (i.e oceans, mountains, language, religion, government, prejudice, fear, ignorance) becomes finer with each passing day, remaining bound by criteria laid forth in the past and ratifying those principles so they just barely apply to today is not progress - you only get closer to limbo.

‘Power’ is no longer self-awarded, demanded or manipulated into being. ‘Power’ is granted by the people you wish to lead (‘lead’ is a title and not a state of being). A leader is only (ever) as successful (in any measure) and effective as their team/followers/challengers.

The finer the divide, the better the links people generate, the less willing they become to accept what has been. It is no longer one person, one religion, one nation - with the Internet it becomes a community of people, religions and nations voicing their opinion (however right or wrong) regardless of how powerless they may think / know they are on their own.

Think of ants. Think of swarms. Think of the simplicity of a butterfly flapping their wings and the complexity of everything that may come from it.