While returning from the gym this evening I was stopped by an older female and questioned about the zigzag street lanes. I looked at her, looked at the street and gave her a blank look. I had actually never noticed the zigzag lanes on the road, a road I cross quite often. 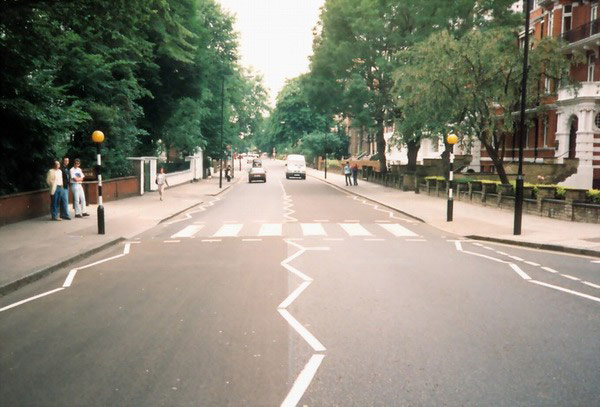 Zigzag lane: Abbey Road. I should have known better.

By default I told her I did not know, I was from New York, had not been in London very long and had never really paid attention to the lanes. She said she thought perhaps I drove and apologized for stopping me so abruptly. I laughed, told her it was quite alright and that it was a fair question. We bid each other a goodnight and continued to our appropriate destinations.

For the remainder of my walk I kept trying to recall a time when, if ever, I had questioned the zigzag lanes and began to also look at the lanes as I crossed and/or walked aside them. I had never noticed them before, I had never questioned them. I had to know what purpose they served so that the next time I am asked “What do the zigzags mean?” I know the answer.

When I returned to my room, I Googled. From desktoplawyer.co.uk: The white zigzags either side of pedestrian crossings must not be parked on at any time. The offence is different from other parking restrictions in that offenders also get their licences endorsed! Turns out the zigzags denote a strict no parking zone.

The zigzags also let drivers know that a pedestrian crossing is soon approaching. This makes sense as there is a pedestrian crossing, I cross it often, and there are no street lights, all there is are the zigzags and two posts. Cars stop the second a pedestrian steps onto the road, I never understood the immediate driver-response until today. That immediate drive-response, I had questioned, on numerous times but had at all times (a) failed to noticed the zigzags and (b) failed to inquire about the drive-response.

In addition, if you park in an area denoted by the zigzag you are subject to a fine (~60 pounds) and points (~3) on your license. Those zigzags are no joke.

Thank you, woman who stopped me on the street randomly, for asking me a question I did not know the answer to. Thank you because I have now learned the answer to your query and one of my own. I am now prepared should another individual have the same queries and approach me.

Strangers can, and often will, teach you something new.