Not an easy task but one many have ventured.

Joseph Schumpeter, an Austrian-American economist, was the first to account / include ‘entrepreneur’ as a defining factor in production, economic growth and wealth development. According to Schumpeter the entrepreneur functions as an agent of economic change and development, with the sole role of innovator: creating a new product, allocating new use for existing product / raw resources, opening-up a new market, formulating a new method of production, driving forth the reorganization of sectors within the economy. He discusses his theory more thoroughly in The Theory of Economic Development (1912, Eng. Trans. 1934).

A blogger for the ‘Insight’ division of Epsilica.com, a business consultancy entity, brings Schumpeter’s definition of the entrepreneur together with theories developed by others, in an attempt to draft a list of key factors which define an entrepreneur.

Entrepreneurs are those who:

2) Exploit opportunities that were never apparent to the incumbent businesses offering that service or product.

3) Focused and charismatic leaders, who won’t take ‘no’ for an answer.

4) People who are very social, as they naturally expand their sphere of influence. So, those that network and swap skills.

An article written by Leigh Buchanan for Inc.com. The quotes presented below are from the article.

“‘If you give them data that has to do with the future, they just dismiss it,’“[as such]”‘They don’t believe the future is predictable…or they don’t want to be in a space that is very predictable.’”

Mundane and repetitive tasks are no fun. The future is uncertain, only a handful of things are set in stone and even those are subjective and disputable. No one likes being boxed, predictability sends people for a loop. It is not about living a life where nothing is certain, it is about cultivating an area where ‘predictable’ is non-optional. Learning is part of the process. Be a sponge?

“‘Your competition is a secondary factor. I think you are putting the cart before the horse…Analyze whether you think you can be successful or not before you worry about the competitors.’”

The way I see it, you can either spend your companies time speculating and concentrating on competitors or you can spend your companies time producing the best, most user-friendly, product and generating consumer-producer feedback interactions. If you’re the best when you enter the market, you’ll be pushed to maintain the quality and you’ll become known for providing the best product and caring about your (whatever size and however diverse) customer base - without customers, you may have the best product but no one will use it and no one will market it for you, free of charge.

“Entrepreneurs thrive on contingency. The best ones improvise their way to an outcome that in retrospect feels ordained.”

“…[E]ntrepreneurs are eternal optimists. But you don’t need an academic study to tell you that.”

This video reminds me of a computer game, I can’t recall which one but the music and graphic are pretty on point. Nevertheless, life is a rollercoaster. This video just shows you a basic ride for the ‘entrepreneur’. ‘Tis no easy feat. 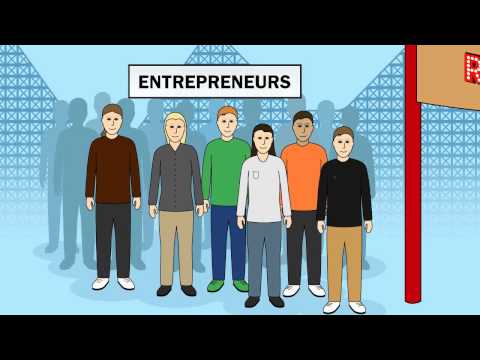 Life’s a ride, no matter what you do or who are. Make the best of it.