Freaks and Geeks was a U.S television show that ran for a season (18 eps) from Sept. 1999 to July 2000. I was ten years old when it started airing. I am now 21 and have been viewing since it stopped airing. The beauty of saved footage, YouTube and video streaming.

By far my favorite scene: 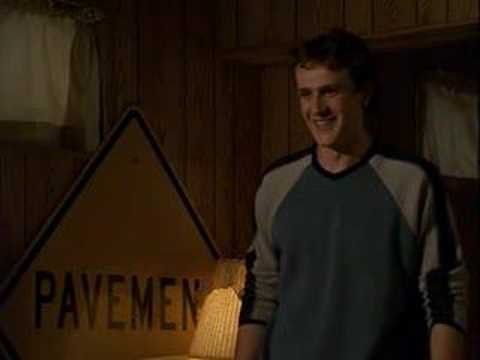 What I can’t figure out is how the writers/Segel managed to make me STILL love Nick/be sad that he and Lindsay (SPOILER!) break up in the next episode even though he is so creepy in this scene that the first time I saw it I literally buried my face in my hands because it was so painful to watch him make a fool out of himself.

I don’t know how they managed to make Nick still loveable after this, but they did, and it was brilliant.

I personally found Nick, played by Jason Segel, hilarious and just so extremely dorky. His performance was indeed painful, Lindsay (Linda Cardellini) was clearly not prepared for his performance of Lady. Nick is actually just as hilarious and dorky, far less creepy, as the persona of Segel’s latest role, Marshall (How I Met Your Mother). I wonder if Segel is just as hilarious, dorky and lovable in real life. In this case, how far does art imitate life? Dang it!

A friend from uni (who at the time was my major crush) once told me: “Luisa, I just want to cuddle….it’s all about the cuddling”, this after my asking why all the guys I knew where so hung up on sex. I sometimes wonder if he meant it or just said it because he knew my take on the matter. In his defense, he stood by his words when it came to me.

Some people just want to cuddle, of course there are more factors to the equation.